Tracy Savage is a research biologist by day, has been an organic worm rancher for decades, runs the Facebook group for Tim Weisberg’s Midnight Society and also has enjoyed being a radio show host by night for over ten years.

Her radio journey began as the “Science Diva” with the Ghost Divas, then on to Joliet Paranormal Radio and other local radio hosting.

She hosts Savage Science Radio on Jackalope105FM, a “geeked out mash-up of science with science fiction, horror, comics and Old Time Radio” – and sometimes interviews and public lectures about pertinent topics.

She also has been a paranormal investigator with a team in SoCal for a dozen or more years, and has appeared on SyFy’s Paranormal Witness.

She likes to share the light of educating about science and critical thinking wherever she can, especially in the para-realm. 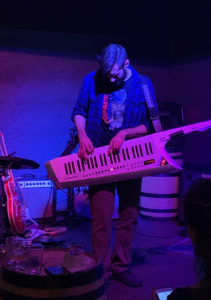 Benjamin Kamphaus is a science fiction author, music producer, and software engineer living in the Front Range of Colorado. He has a PhD in Geography from SUNY Buffalo, completed with an interdisciplinary focus that ranged from archaeology to artificial intelligence. His early professional career was situated at the intersection of the space, earth, social, and information sciences. He currently splits his time between family, software, AI, the outdoors, judo, philosophy of mind, and his creative pursuits, which include his electronic music project PatternShift. As PatternShift, he composes synthesizer music set in the same worlds as his fiction. When not in Colorado, he can be found traveling the world in search of a good cup of coffee.

PatternShift is the cinematic synthwave project of science fiction author Benjamin Kamphaus. His music is instrumental, evocative, and expansive, interweaving elements of dark and space ambient with retrowave drive. When not writing and producing music, he can be found slinging code, sailing the solar wind, or hiding out at one of his favorite haunts, Oneiri Station, in the Vaskania system.