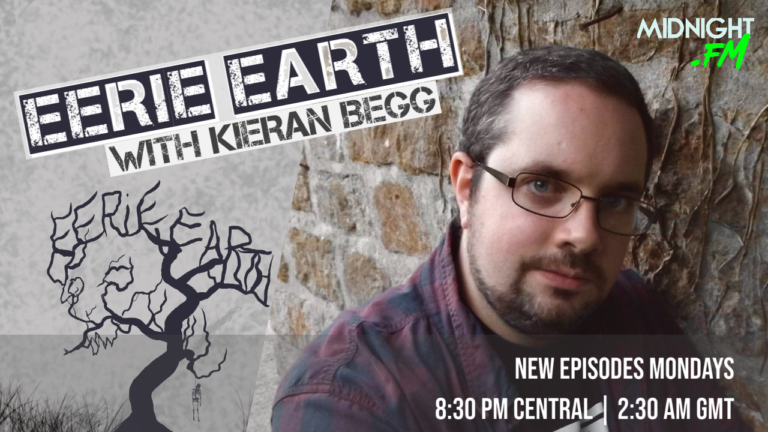 EERIE EARTH with Kieran Begg  airs Mondays at 8:30 PM Central/2:30 AM GMT only on Midnight.FM

Join Kieran as he guides you to Scotland’s Capital once again to tell you one of Edinburgh’s most infamous tales, the story of William Burke and William Hare.

In his most compelling story yet, he will tell you about their murders, their capture and execution in this detailed, gruesome and thrilling story.

Kieran Begg is a writer and the host of the UK late night radio show, “Eerie Earth”. Investigating the paranormal since 2007, Kieran’s fright and fascination in the field spans for most of his life since childhood, as his father would regale him with tales of intrigue from his haunted drama studio, with the shenanigans of a pesky poltergeist.

Getting his start in the field in 2007 while studying in college for television production, as he wrote his first documentary script about ghost stories of Aberdeen, he was invited to join a local paranormal group where he spent two years investigating locations around Scotland.

After moving to Bristol, he started his own paranormal group, “Torchlight Paranormal,” investigating some of the most haunted locations around the South West of England, including the infamous Ancient Ram Inn.

From Ghosts and Spirits, to Ufology and Cryptozoology, Folklore and Dark Tales that plague some of the most haunted cities in the world, “Eerie Earth” takes you on a journey discussing everything in the field. Join us in examining this wonderful and fascinating “Eerie Earth”, Mondays at 8:30 PM Central/2:30 AM GMT on Midnight.FM

FOLLOW EERIE EARTH for an interactive experience with the show, as we examine the evidence and talk with the audience!